Tibor Sarnyai of ludovika.hu has recently interviewed our colleague, Veronika Szeghy-Gayer, about her research interests, career choices, and what she thought about the chances of consensus in research related to the Trianon Treaty across borders.

Was history a childhood interest for you or was it later that you decided you would become a historian?

I must have been interested already during childhood because I often talked to my grandparents about World War 2, about the years my grandfather spent as a prisoner of war and about those émigrés that left the country after 1956. Yet, I did many other things so it was only towards the end of my post-graduate years that I decided I would try to become a historian. 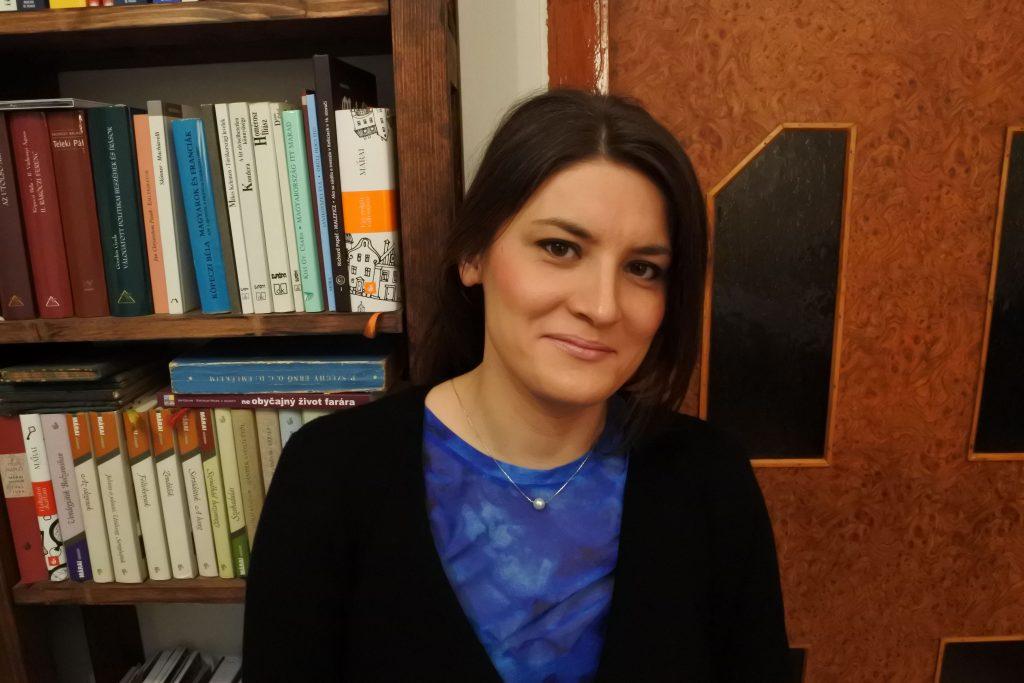 You studied in Budapest and then in France. How did you end up in Košice (Kassa)? What are the kinds of experiences that a Hungarian researcher gains in Slovakia?

During one of the seminars Professor Csaba Kiss Gy. mentioned that learning the Slovak language would open the entire Slavic realm. I found this very exciting and I started to learn the language in Bratislava. It was due to private life choices that I ended up in Košice since my husband is an archivist there.  It has its pros and cons if someone lives in their own field of research as I do. It is more difficult to switch off from work. This region inspires me even though both Slovaks and Hungarians see me as a bit of a weirdo when they learn that I left Budapest for Eastern Slovakia.

If you were to start your career now what is the field you would orientate yourself to?

Probably I would choose a similar research topic to the one I described when I submitted my application to the doctoral school. In terms of the institutional landscape has drastically changed in the past decade and this means an early-career humanities person faces different challenges from the ones I had to tackle back then. The one thing I would certainly do differently: I would try to get hold of a scholarship to a German university or research institute and learn German and Hebrew. Unfortunately, I can barely read in German and it is among my larger goals to learn Hebrew.

What is it that you like the most about being a researcher?

I do what I’m really interested in most of my time and I’m the one who allocates time for different tasks. This is a very practical thing in terms of efficiency and if someone has a young child.

What are the research questions that interest you this time?

I take part in the Research Group called Trianon 100 that Balázs Ablonczy leads. I work on local examples and issues of state succession in 1918 in the territories of former Abaúj-Torna (Abov-Turňa), Sáros (Šariš) and Szepes (Spiš) Counties and I also engage the problem of civil servants. I’m particularly interested in understanding the groups that stayed in Czechoslovakia, such as teachers, employees of the postal service, and railways. Moreover, I study the behavior of local elites. I have completed a paper on strategies that mayors followed in the region. It will soon be published by the Slovak Academy of Sciences. It turned out that most of them stayed and one-third of them swore loyalty to the new state. I would like to stress that such choices were just as relevant as the option of leaving.

How does your research institute at the Nation University of Public Service assists you in this work?

I have started research on the multi-ethnic heritage of cities that are in the territory of Slovakia and the pre-1938 social history of Jews. I’m particularly interested in the topic of multilingualism and local identity in historical context. I learn much from seeing how researchers work on these topics in Polish, Czech, Romanian research institutes. At the Institute of Central Europe of the József Eötvös Research Centre, I can learn much about this from more experienced colleagues.

How do you think your field of research contributes to Hungarian historiography?

I hope that it helps to tone down ethnocentric views just enough to see grievances of other groups, too. I think it is a fundamental issue that Slovaks and Hungarians hardly know anything about each other, and this must change. This probably sounds idealistic, but I will have time to be less idealistic when I grow old.

Do you think that research will reveal something new about such a well-researched topic such as the negotiations preceding the Trianon Peace Treaty?

I don’t think there is an issue about which there is nothing more to find out. There are phenomena and events that have been thoroughly researched, but it makes sense to reconsider even these from time to time. For example, the last historical study on the Slovak Soviet Republic is from the 1970s. I’m not sure that it is the Marxist point of view that a contemporary historian needs to repeat. This is the quasi-state that I talked about on 25 February at the conference that the Institute of Central European Studies and the Trianon 100 Research Group organized about the ephemeral states of 1918-1920. History as an area of knowledge has improved a lot in terms of methodology in the past decades and a lot of archival material became accessible after 1989 that had not been available previously.

What do you think about the quality of public discourse on Trianon in Hungary and across the border?

It is quite remarkable than an event that took place a hundred years ago has such a strong presence in collective memory and in public discourse in Hungary. There is a major difference between Hungary and Slovakia in this regard. While for Hungarians the whole issue is a very complex one and includes the minorities that live in neighboring countries, revision of borders before and during World War 2, exchange of population and a dozen problems of current political debates, this is a strictly historical question that does not impact present conditions.

This difference has to do with differing attitudes towards the past in general. With some exaggeration, one may say that Slovaks are not interested in history while Hungarians are obsessed with it. It does not mean that they forgot to commemorate Trianon: there will be conferences and exhibitions devoted to the issue in Slovakia. One of the historians who is typically critical of Hungarian memory politics has recently said that he could have thought of worse than the monument that will be unveiled near the Parliament in Budapest: there is no guillotine or dismembered body represented, only a list of 12 000 place names in their Hungarianized version.

Do you think there will be a consensus about the Trianon question?

If consensus means that we acknowledge each other’s point of view and the objective is to know one another better then there is hope. I would even say that historians could make a collaborative textbook, as there is a new generation of historians compared to the situation ten years ago.